3M, the original creator of window film, has created a product so incredibly efficient that no other window tint in the world can compare to it except for it’s residential version, 3M Prestige. This film that is the thickness of a sheet of paper,  has over 200 layers of optically clear 3M patented polyester to create a prism effect for the sunlight to get spread out between each layer, drastically reducing 97% of the sunlight’s IR light (infrared), which is where most of the heat comes from.  The Crystalline window film from 3M is truly a far superior window film when compared to ceramic window tints whether from 3M, or it’s competitors like Huper Optik and Llumar. Any reputable window film manufacturer has an automotive ceramic window tint to offer and so does 3M, but the difference is that 3M does not stop at ceramic technology. The 3M Crystalline Window Film for automotive window tinting stops 93% of the solar energy from transmitting through the glass and also maintains a true lifetime warranty from “purpling,” peeling, blistering, bubbling, and delaminating. You pay one time to have your windows tinted with most of 3M’s color stable window films, and are guaranteed to never have to pay out of pocket again to have it repaired if the film fails during your ownership of the vehicle.

3m crystalline window tint, the best or nothing. 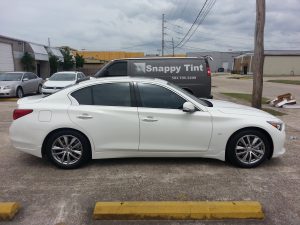